As I indicated in my opening post for this toon, I guarantee you, from my own personal experience, that once it's been determined there's going to be an event taking place in a women's dorm, the girls living there can move really quickly so that they don't miss anything........LOL. In this case, I think pretty much every one present in the lounge has figured out exactly what that event is going to be. Xandra seems to be a bit slower picking up on this but even she's starting to understand that she's in big trouble.......LOL. I hope you enjoy the 2 pics I've posted today. Phil 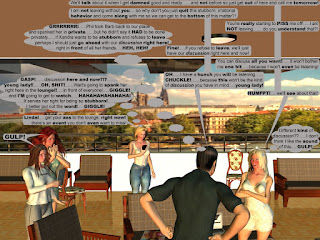 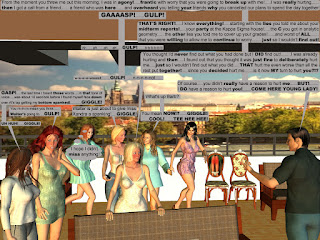 Sometimes you have to do whatever it takes to help a friend, even if it means embarrassing yourself! However, your motive for doing this this could depend on the viewpoint from which you're looking at this!........a helpful friend from one viewpoint might be a nothing more than a stool pigeon from another person's point of view. Of course, it just could be that our friend might have had more than one motive.......LOL. In any case, it looks like Xandra's plan is starting to come unraveled. I have posted the next 4 pics today to finish setting this scenario. I hope you enjoy them. Phil 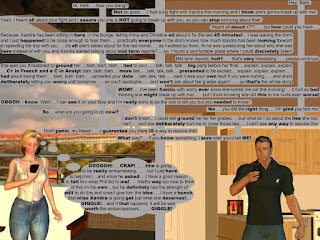 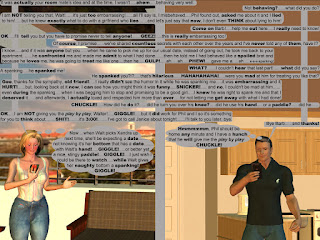 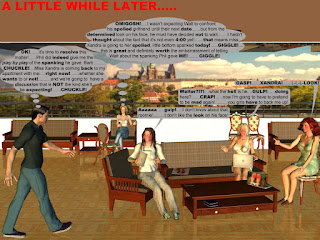 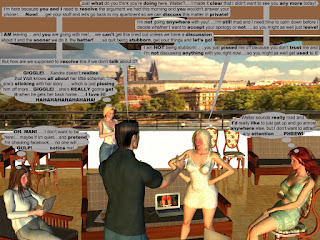 Today we are starting a new toon and I am going to post the first 4 pics to get us started and explain the situation. I'm sure that any of you who have ever lived in a dormitory know that all kinds of interesting things go on in such an environment. I can tell you from first hand experience, under the right circumstances, such things can sometimes become an EVENT!

When I separated from the U.S. Army, I hadn't seem my girlfriend for 9 months so the first thing I did was call her and make arrangements to come and pick her up for the weekend. All appeared to be quiet when I entered her dorm and asked to see her. A young woman went to get her and only a few seconds later, my girlfriend burst through the door, jumped into my arms and we just stood there making out! When we came up for air, there were at least 2 dozen grinning, approving young women watching us, applauding and cheering us on! I have no idea where all those women came from or how they got there so fast but apparently, everyone knew I was coming and no one wanted to miss this EVENT! Anyway, you see my point...........LOL.

With all this in mind, I will set the scene for you. It takes place in the "Red Bottomly" Hall, a girls dormitory at Overbarrel University. This facility was named after Beauregard "Red" Bottomly who was the alumni who generously donated the money to build the dorm. As our scene opens, we see some young women chatting in the lounge. I'm calling the new toon " Good Marks". I hope you will all enjoy it. Phil 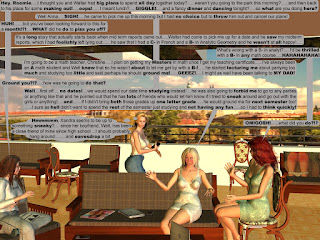 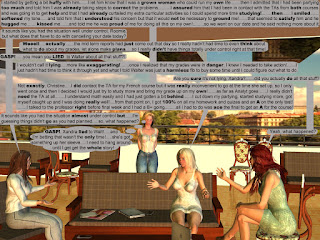 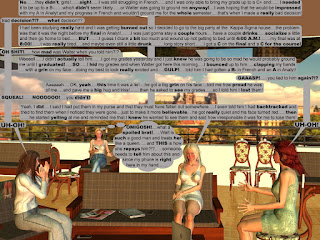 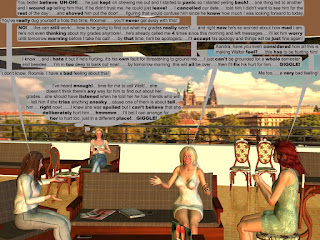 I think there are lots of toons that show a young woman getting a spanking in front of her parents but I wondered what would happen if it was the mom who got the spanking instead of the daughter. When I posted the first pics of this toon on Feb. 27, 2015, my intention was just a story showing how that might go. As I worked on the toon and more ideas came to me, either from my own fantasies or from viewers suggestions, the toon kind of took on a life of it's own and just kept growing........LOL. Now, just over a year later, we are finally at the end of this long toon.

It seems to be an inherent trait of our species that women and men talk to their friends about their marriages and relationships.....and it's not only the everyday things, but also the more personal aspects that get discussed.....or in some cases, perhaps it's those personal aspects that are the most fun to discuss.....LOL. It always seemed to me that, if husbands spanking their wives, was more generally accepted in mainstream culture, that spankings might also be discussed just as romantic activities are now.

This is the case in my perfect, fantasy, spanking world. In every small town or subdivision, most husbands spank their wives routinely when they think it's needed and everyone knows this is going on. That being the case, it always seemed to me that that a woman who has gotten a spanking from her husband would probably discuss this with her sister, mother, close friends or neighbors, just as women discuss their romantic adventures in the real world. Being a male spanker, I always thought it would be really interesting to be a fly on the wall during one of these conversations so I could hear exactly what was being said.

That being said, I have thought several times that I would like to end a toon by depicting such a conversation. Since we have a mother and daughter who both got spankings on the same day in this toon, I decided some months ago that this was the perfect opportunity to give this a try. Since I made this decision, I have had 4 viewers comment that they wondered about such discussions, even though I hadn't mentioned my intention. My thought was that I would end the toon with 2-3 pics showing Vicky and Tina discussing the spankings they had gotten the day before. As with the rest of the toon, once I started working on this, it also kind of took on a life of it's own so instead of 2-3 pics.........I will be posting the last 10 pics today!

While I have tried to provide at least some visual interest in these 10 pics, at least for the male viewers, there is no spanking, corner time or other action. It is strictly Vicky and Tina discussing their spankings. If you really only like the action pics, you might want to stop here and skip today's post.

For those of you who decide to check these out, I will mention 2 things. First, you have me, a male spanker, writing this and since I have never been invited to listen to such a discussion, all of this comes from my fantasies about how such a conversation might go........LOL. Second, as we all already know, even though we are all spankos, each person and each couple is different with different ways of doing things and different likes, dislikes and turn ons. Some of this might leave you shaking your heads while other parts might make a connection with you or bring back memories. Hopefully, all of you will find something in this that you can identify with.

Anyway, I want to invite all of you to make any comments that you might have as you read through the pics. I will be interested so see what everyone likes and doesn't like about this. In any case, I hope you enjoy the ending I came up with for this toon. Phil 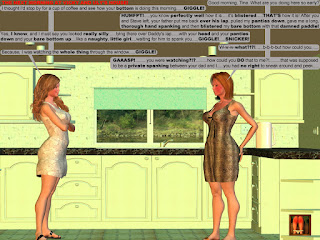 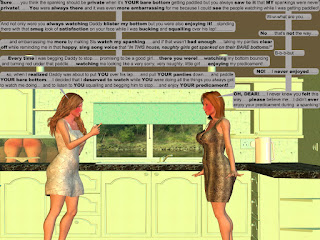 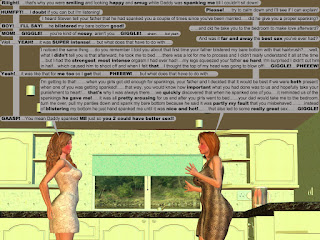 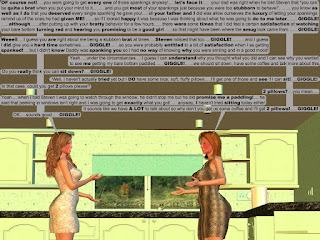 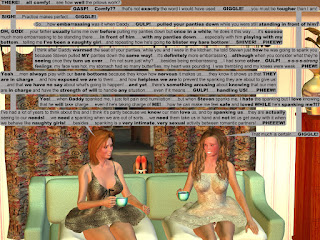 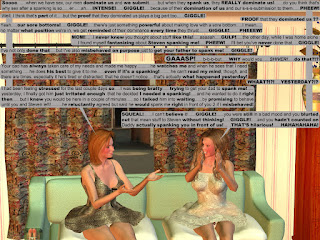 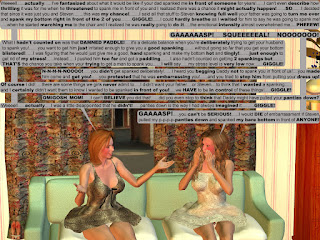 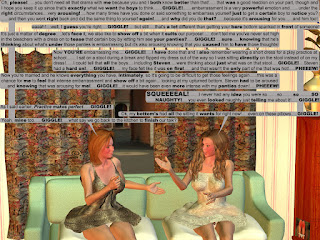 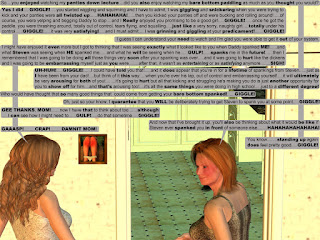 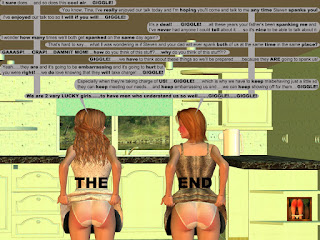